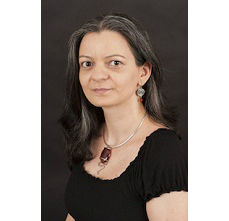 Evgenia Fotiou is Assistant Professor of anthropology at Kent State University. She has a PhD in cultural anthropology and Latin American studies from the University of Wisconsin Madison, where she completed doctoral research on ayahuasca use in the context of tourism.

She has taught as a lecturer at the UW-Madison departments of Anthropology and Gender and Women’s Studies (2011–2012), and as an ACM-Mellon Postdoctoral Fellow in Indigenous Religions at Luther College, where she taught courses in the Department of Religion and the Department of Sociology, Anthropology and Social Work (2012–2014). She was also a guest editor of a special issue on ayahuasca and healing for the journal Anthropology of Consciousness, published in the spring of 2012.

She is currently on the board of directors for the Society of the Anthropology of Consciousness and a founding member of the International Society for the Academic Research on Shamanism. She is interested in health and healing in cross-cultural perspective as well as indigenous religions, and is currently researching the revitalization of pre-Christian religion in modern Greece.

Several relevant and intriguing essays by Evgenia can be found at luther.academia.edu/EvgeniaFotiou