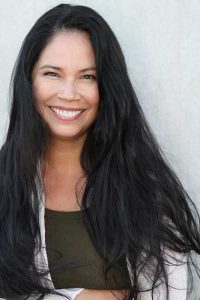 Kateri Walker is a tribal member of the Chippewa of the Thames First Nation, Ontario, Canada, and the Saginaw Chippewa Indian Tribe of Michigan. She received a Bachelor of Arts degree from the University of Michigan, where she studied theatre because she wanted to be a role model for children, for whom she has a deep respect and love. Since then she has had a remarkable career as an actress, with many leading and supporting roles in major film, television, and theatrical productions for which she has received numerous awards.

French cult-film director Jan Kounen cast Kateri in a role written expressly for her in the ayahuasca feature film Blueberry (called Renegade in the USA). Kateri also helped Kounen conceive, develop, and produce Vape Wave, a 2017 documentary about the demise and cultural abuse of sacred tobacco and the birth of vaping with electronic cigarettes that she also acted in. The film’s focus is to honor tobacco and raise awareness about cigarettes’ harmful, addictive, and deadly qualities.

A consummate Jingle Dress dancer (a traditional First Nations women’s pow wow dance), Kateri has represented Native Americans as Head Lady Dancer many times and was honored to Jingle Dress dance at the grand opening of the Smithsonian Museum of the American Indian in Washington, D.C.

Among her many talents and passions, Kateri speaks fluent French, has spoken Lakota, Wampanoag, and Ojibwe in films, and is a motorcyclist, equestrian, skier, and active participant in numerous other sporting activities.

At the Spirit Plant Medicine Conference Kateri will speak about how to apply medicine journeys to our lives when seeking and gaining an enlightened spirit.