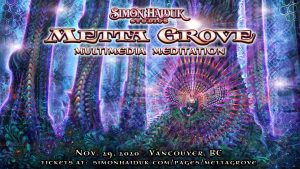 Growing up in British Columbia, Canada, Simon developed a strong affinity to nature with artistic foundations in visual art and music. In 2004 he gravitated towards painting as a full time endeavor bringing his musical background into the visual realm. Simon has explored many visual mediums, often with a strong influence in spiritual themes connected to nature. In 2007 he graduated from Vancouver Film School, Digital Design, where he learned motion-graphics, among other computer skills. This led to him animating many of his paintings, and subsequently has now brought this to many live VJ performances with various global music acts including his own.

He continues to also produce music, and has released four full length solo albums since 2002. Within art galleries, festivals, conventions, and online platforms, his work is exhibited globally. He currently works out of his studio in Roberts Creek, BC, while continuing to explore an ever expanding palette of creative endeavors.